The annual Achievability and Sustainability of Human Exploration of Mars Workshops, initially launched in 2013, assemble renowned experts in mission architecture, science, policy and other disciplines to find achievable and sustainable paths for sending humans to Mars in the 2030s. Since 2018, these workshops have also incorporated lunar experts to help determine how missions to the surface of the Moon can feed forward to Mars. The final reports from these workshops are distributed to key stakeholders and policymakers to help assure that missions to the Moon and Mars are conducted as efficiently and sustainably as possible. 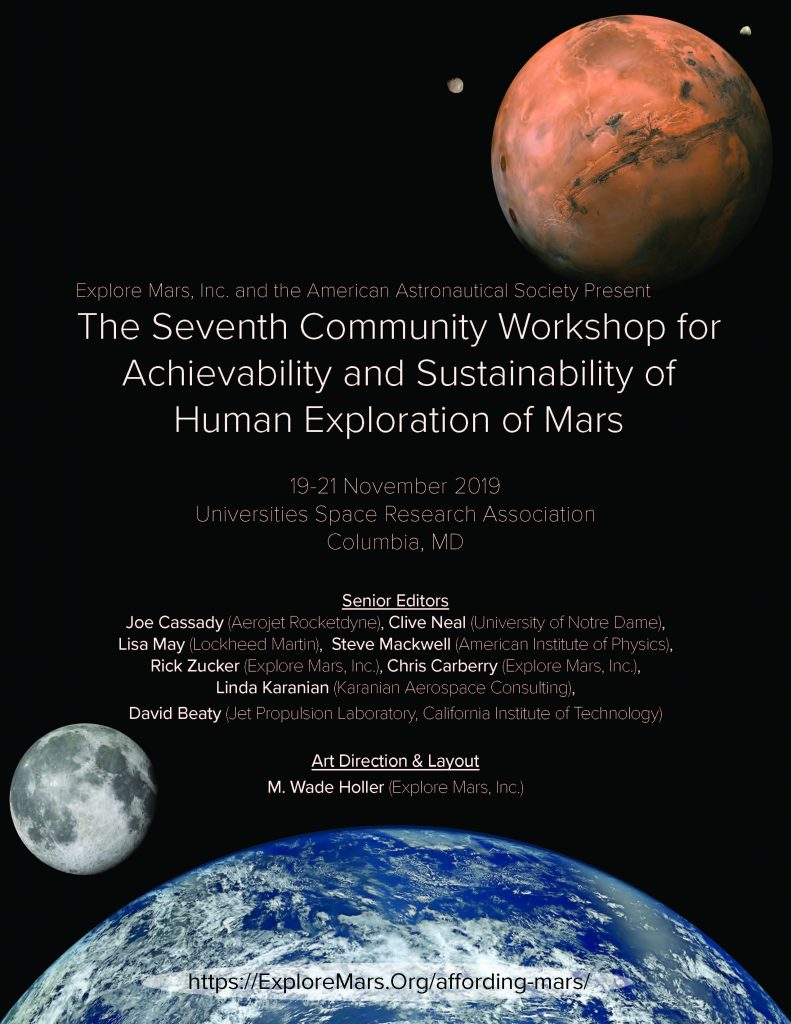 Approximately 50 subject matter experts on human and robotic lunar and martian exploration, science, operations, key technologies, and policy assembled in mid-November 2019 at the headquarters of the Universities Space Research Association (USRA) in Columbia, Maryland to critically assess how operations, technologies, and facilities for the Moon and its vicinity might feed forward to human missions to the martian surface before the end of the 2030s. This workshop was the seventh in the series of community workshops on Achieving, Affording, and Sustaining Human Exploration of Mars (a/k/a AM Workshops) hosted since 2013 by Explore Mars, Inc. and the American Astronautical Society. Appendix A includes brief summaries of previous workshops, while the full reports for the workshops are posted online at https://www.exploremars.org/affording-mars/.

Building upon the work and findings of the previous AM Workshops, particularly the Mars exploration scenarios and enabling technologies analyzed in the sixth (AM VI), fifth (AM V), and fourth (AM IV) workshops, this report of the seventh workshop includes the findings of its two Working Groups that were focused on various lunar activities that show varying degrees of promise in enabling Mars exploration. The Capabilities Working Group addressed the “feed forward” characteristics of several key capabilities identified in the AM VI Workshop, and the In-Situ Resource Utilization (ISRU) Working Group addressed the “feed forward” characteristics of ISRU, which was identified in AM VI as an area warranting future study. The findings of the two Working Groups are described in the following sections, and further discussion of the process and additional details that support the findings for each Working Group are included in Appendices B and C.