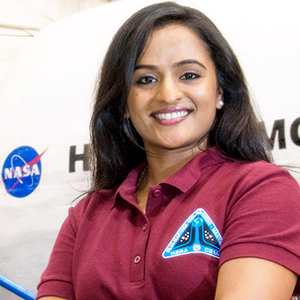 Dr. Kavya K. Manyapu is a Space Scientist at NASA working in Flight Operations and Training for Exploration EVA (spacewalks and spacesuits!) on the Artemis Program. Prior to  NASA, Dr. Manyapu worked for over a decade on building the next generation human rated spacecraft, the CST-100 Starliner, at the Boeing Company where she she served several roles including  Starliner Spacesuit Lead and a Flight Test Director for Starliner’s Flight Tests. She also served as a Mission Evaluation Room (MER) Manager for the International Space Station (ISS). She an Adjunct Professor at  the University of North Dakota (UND) in the School of Aerospace Sciences.

Kavya holds a Bachelor of Science in Aerospace Engineering from Georgia Institute of Technology, Master of Science in Aeronautics and Astronautics from the Massachusetts Institute of Technology (MIT), and a Ph.D in Aerospace Sciences from UND. Her research envelops novel, next generation spacesuit technologies for planetary missions with a focus on self-cleaning spacesuits for moon and mars missions and holds five patents. Spacesuit samples based on her research work were recently launched to the International Space Station.

Prior to joining Boeing, Kavya worked on the Orion/Constellation program at Lockheed Martin and Mars Bio-satellite program at Georgia Tech and MIT. She served as a crewmember on NASA’s 15-day asteroid simulation mission at Johnson Space Center and two Analog Mars Missions in Utah, researching technologies for long-duration human spaceflight missions. She is a private pilot, certified underwater SCUBA diver, aerobatic pilot, an avid hiker and a Indian classical dancer. Kavya enjoys educating and inspiring students to pursue careers in STEM fields.

Kavya served as the North, Central America and Caribbean Regional Coordinator for Space Generation Advisory Council from 2016-2019,  serves an Aerospace Officer and 2nd Lieutenant at the Civil Air Patrol, Ellington Squadron in Houston. She is passionate about human space exploration with a belief in the universal applicability of space research for the betterment of our planet.