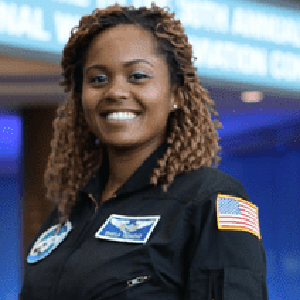 Shayla Redmond is currently an Engineer at Mercer Research Center in Georgia where she works on various aerospace contracts in support of sustainment and innovation. She enjoys dancing, singing, martial arts and weightlifting during her free time.

She received her Bachelor of Science degrees in Aerospace Engineering and Physics from Tuskegee University in May 2011 and Masters of Science Degree in Systems Engineering with a concentration in Space Systems from the Air Force Institute of Technology in September 2016. Completing a Thesis on “Conceptual Architecture System to Measure the Effects of Subauroral Polarization Streams on Radar Operations”.

Shayla Joined International Institute of Astronautical Sciences ( IIAS) fall 2017 where she was able to take part in citizen science research and suborbital training. She has also founded STEAM unlimited a non profit that focuses on the sciences from grade school to professional and the arts such as movies, fashion and music. Sharing how they both work to excel humanity while making it accessible to all communities. She looks forward to continuing her knowledge in the research and testing field of the upper atmosphere and beyond furthering her career as a lover of discovery and space!