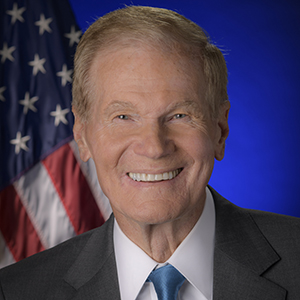 Sen. Bill Nelson was sworn in as the 14th NASA administrator on May 3, 2021, tasked with carrying out the Biden-Harris administration’s vision for the agency.

Nelson chaired the Space Subcommittee in the U.S. House of Representatives for six years and later served as the Ranking Member on the Senate Commerce, Science, and Transportation Committee, where he was recognized as the leading space program advocate in Congress.

During his time in Congress, Nelson was a strong advocate for NASA’s Earth science programs and authored numerous pieces of legislation to combat and mitigate the effects of climate change. Nelson was also a vocal proponent for STEM career training and education programs to create and fill the jobs of the future.

In 2010, Nelson and Sen. Kay Bailey Hutchinson (R-Texas) passed the landmark NASA legislation that mapped out a new future for NASA and set the agency on its present dual course of both government and commercial missions. In 2017, Nelson and Sen. Ted Cruz (R-Texas) authored the NASA Transition Authorization Act of 2017, which expanded NASA’s commercial activities in space. After leaving the Senate, Nelson continued to be engaged in NASA activities, serving on the NASA Advisory Council under former Administrator Jim Bridenstine.

From president of 4-H to international president of the Key Club in high school, Nelson has always known the importance of investing in your neighbors and community to create a better future.  Nelson continued to serve his community and country while in college at the University of Florida, Yale, and University of Virginia Law School through various service organizations, school leadership positions. He served on active duty as a Captain in the U.S. Army.

Nelson has served in public office over four decades, first in the state legislature and U.S. Congress, then as State Treasurer. He was elected three times to the United States Senate, representing Florida for 18 years. His committees included the breadth of government policy from defense, intelligence and foreign policy to finance, commerce, and health care.

In 1986 he flew on the 24th flight of the Space Shuttle. The mission on Columbia orbited the earth 98 times over six days. Nelson conducted 12 medical experiments including the first American stress test in space and a cancer research experiment sponsored by university researchers.

In 1971, Bill met Grace Cavert of Jacksonville, Florida, while speaking at a statewide young leader convention. Grace has been an active partner in Bill’s public service career. From his first race for a seat in the Florida Legislature, Grace has been by his side knocking on doors and talking to folks about issues that mattered to them and their families. They have two grown children, Bill Jr. and Nan Ellen.