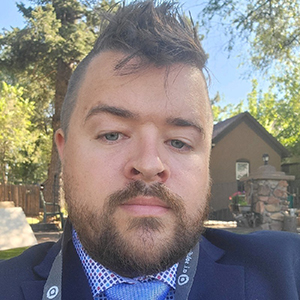 Jason Michaud has worked in collaboration with the Canadian Space Agency and the National Research Council of Canada on the EDEN project creating solutions for mental health of astronauts utilizing virtual reality, neural systems, haptics feedback in Lunar, Martian, and Micro gravity environments with the goal to make the first remote space hug possible with your loved ones on earth.

Most recently a very important international partnership between Stardust, ispace, EXPLOR, and the University of Technology Sidney was formed under the leadership of Jason to create the first haptics robotics arm named “One for All” which will tentatively fly to the south pole of the moon in 2024 and will be aimed at promoting STEM education for the youth through the recorded sensations of the surface of the moon through haptics and through the develop the future tools for the space industry.

Jason studied Computer Engineering at Collège Boréal and is a Certified Practitioner for CyberSecurity Certification (CPCSC) by Watsec Cyber Risk Management, and most recently made the 27th out of 46th finalist on TOP Men in Aviation and Aerospace to Follow on LinkedIn 2021

Jason is also involved as a Director at the Habitat Marte, in Brazil to further enhance its international collaborations, as well as to promote STEM education. Furthermore, Jason serves on multiple boards such as a member of the organizing committee, the Centre de Formation as an Administrator, the Cochrane Board of Trade as a Board Director, and the Canada Nickel – Contributions and Procurement Committee as a director .

Last year, Stardust joined the International Astronautical Federation at the IAF General Assembly during the IAC 2021 that took place in Dubai, U.A.E.