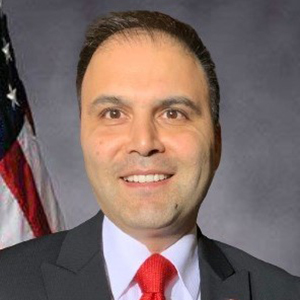 Mir Sadat has more than twenty-five years of experience in private industry, higher education, and the US government. He is a nonresident senior fellow at the Atlantic Council’s Scowcroft Center for Strategy and Security, an adjunct scholar with Modern War Institute at West Point, and an adjunct professor at Georgetown University’s Center for Security Studies.

Recently, he founded and serves as the editor-in-chief of Dauntless - guiding star for spacepower. Previously, he founded and served as the first editor-in-chief of Space Force Journal after completing his detail to the US National Security Council (NSC), where, as a policy director, he led interagency coordination on defense and space policy issues. In that role, he supported the establishment of both the US Space Force and US Space Command in recognition that space has also evolved into a warfighting domain similar to land, air, sea, and cyber. While on the NSC, Sadat also prioritized national security decisions involving US civil space and the commercial space sector. He led multiple efforts to reduce US risk and critical dependencies in US civil space and the commercial industrial base on foreign nations who view the United States as an adversary. Sadat pushed for innovative US policies to power space vehicles with modular nuclear reactors, secure the space supply chain, improve strategic messaging for space, establish norms and behavior in space, and to prevail in a new era of strategic technical competition. In 2021, he co-authored Space Policies for the New Space Age: Competing on the Final Economic Frontier and Space Budgeting for Modern Times.

He is also a naval officer with intelligence and space qualifications. In his preceding two naval assignments, he served as a space policy strategist with the chief of naval operations in the Pentagon and as a space operations officer with the US Tenth Fleet/US Fleet Cyber Command. Sadat has also spent a considerable amount of time in various assignments within the US national security enterprise. In addition, he has previously deployed to overseas contingency operations in Afghanistan, where he served as a strategic advisor to two International Security Assistance Force commanding generals. Since August 2021, he has helped stand up Global Friend of Afghanistan, a US-based non-profit organization that educates people about the history, culture, and current events affecting Afghanistan.

Sadat has also served as a cultural advisor to two Hollywood productions—The Kite Runner and Charlie Wilson’s War. He has a PhD from Claremont Graduate University and has taught at various universities in California and Washington, DC. He has trained and educated US and NATO troops on a variety of topics to increase their operational capability and strategic impact. Sadat has written extensively on US national security, space, Afghanistan, South Asia, and the broader Middle East.