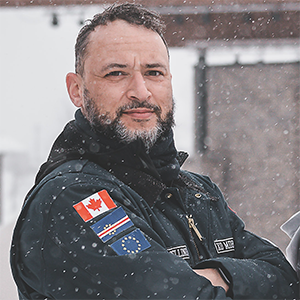 Space Exploration Narratives and Transmedia Storytelling as Catalysts for Public Engagement
An inveterate polymath, P.J. Marcellino is a political scientist, cultural programmer, and communications professional, as well as an extensively published journalist/writer, and an award-winning documentarian. He is also a senior protocol producer with the international hit franchise Big Brother. Marcellino started his career in journalism and publishing, and later worked as a scholar and educator specializing in human rights, human security, migration, multiculturalism, social inclusion, and sustainability. He served as a researcher and senior policy advisor with non-profits, research centers, small island states' governments, and international agencies including the UN, the EU, and the Peace & Security Department of the African Union.

An avid outdoorsman, polyglot, and pilot-in-training, in 2020 Marcellino joined the international community of analog astronauts as the Crew Documentarian and later, Executive Officer of Crew 238 at the Mars Desert Research Station, in Utah. Delayed by COVID-19, the mission would eventually happen in early 2022, after two years of preparation. With the mission laser-focused on astronauts' mental health, communication protocols, and public narratives on space and Mars-exploration, Marcellino played dual logistical and communications roles, facilitating the crew's testing of experimental technologies by aerospace start-ups Braided Communications (Scotland) and Stardust Technologies (Canada). Over the course of the mission, he published over three dozen media reports focusing particularly on crew functionality, personal rationales, the paradox of personality, and how storytelling and explorer narratives power public support for space exploration. He is currently in post-production of a short film about the experience, entitled "On the Edge of Mars". Since his return to Terra, Marcellino has been actively involved in the organization of four upcoming analog rotations in various stations. He is also slotted to do his  first parabolic flight later this year.