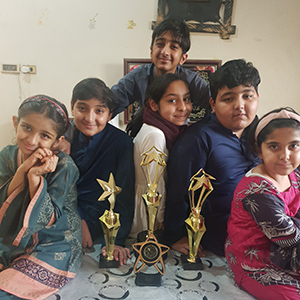 The title of their presentation is :
MOM (Mars Oxygen Machine) - The Bearer of Life
Team Bio:
Meet Ninja Brothers and Pink Fairies. They have been involved in STEM programs since they were 4 years old. Hashim, Ayaan and Usayd (12 Years Old) are Ninja Brothers and Nusaybah(8), Eshaal(9) and Urwah (7) are Pink Fairies.
In 2018 Ninja Brothers presented the idea of OxyFoxy (an oxygen generating machine on Mars) in Cities in Space International Competition.  They won in their category. In 2020, 2021 and 2022 Pink Fairies and Ninja Brothers participated and won Cities in Space Competition. OxyFoxy along with other emerging technologies; was a part of their Mars City Design. They researched about Mars and how humans can colonize mars. They presented their research in a document and in a mockup design on Minecraft. OxyFoxy evolved into MOM in 2021 when Pink Fairies suggested that it was a more suitable name for the technology.
About MOM:
Photosynthesis sure is a miracle, isn't it? It allows plants, bacteria, and algae to take carbon dioxide and, with the help of a little sunlight, turn it into the oxygen we all breathe. OxyFoxy have taken photosynthesis out of the equation and have managed to make oxygen (O2) by zapping carbon dioxide (CO2) with a laser. The device consists of two lasers — one to split the CO2, and one to detect the fragments produced. First laser is directed upon the carbon dioxide, the second laser detects O2 molecules and carbon atoms.