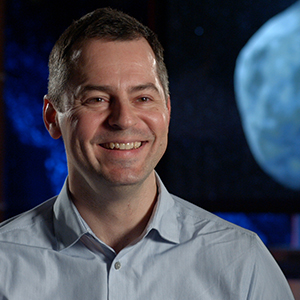 Tim Haltigin is the Senior Mission Scientist in Planetary Exploration at the Canadian Space Agency (CSA), where he helps lead Canada’s efforts in exploring the solar system. He received his PhD from McGill University, with his research program revealing similarities in the evolution of ice-rich terrains on Earth and Mars. He has been with the CSA since 2010, having been involved in a variety of Canadian contributions to robotic missions to Mars, the Moon, and asteroids.

Dr. Haltigin is actively involved in a variety of future Mars planning exercises. He has been instrumental in developing the end-to-end science program for the Mars Sample Return (MSR) campaign, co-chairing the iMARS Phase 2 working group, and leading science program development for the MSR Science Planning Group (MSPG) 1 and 2. In addition, he is presently the Canadian project scientist for the International Mars Ice Mapper (I-MIM) mission concept.

He was previously in the running to become Canada’s next astronaut, and has an asteroid named after him (130066 timhaltigin). More details about his projects and background can be found at sciencewithtim.webnode.com