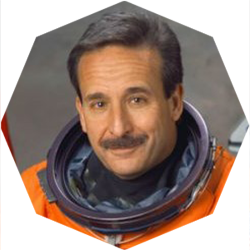 Charles Joseph “Charlie” Camarda (born May 8, 1952 in Queens, New York) is an American engineer and a NASA astronaut who flew his first mission into space on board the Space Shuttle mission STS-114. He served as Senior Advisor for Engineering Development at NASA Langley Research Center.[1]

Camarda is a native of Ozone Park, Queens, New York and graduated from academic and athletic powerhouse Archbishop Molloy High School in 1970. Speaking of his early interest in space flight, Camarda said, “It was a time when spaceflight was so intriguing. It was natural for me to want to be an astronaut, to dream of being an astronaut.” He graduated with a bachelor’s degree in aerospace engineering from Polytechnic Institute of Brooklyn in 1974, a master’s degree in engineering science from George Washington University in 1980, and a doctorate in

aerospace engineering from Virginia Polytechnic Institute and State University in 1990. After receiving his bachelor’s degree, Camarda began work as a research scientist at the NASA’s Langley Research Center in Hampton, Virginia. In the Thermal Structures Branch, he was responsible for demonstrating the viability of a heat-pipe cooled leading edge for the Space Shuttle. Camarda then headed up the High-Speed Research and Reusable Launch Vehicle programs and oversaw several test facilities such as the Thermal Structure Laboratory, where he worked on numerous Shuttle component developments.

Camarda holds seven patents on various innovations, including NASA’s Heat-Pipe-Cooled Sandwich Panel, named one of the top 100 technical innovations of 1983 by Industrial Research Magazine. After more than 20 years of experience in diverse Shuttle technology applications, he made a career change that put him closer to his work while achieving his dream. Camarda was named a mission specialist in 1996. He also served as a faculty at NYU Poly.[2]Camarda served as a back-up crew member for Expedition 8 of the International Space Station. His first space flight was STS-114, NASA’s “return to flight” mission following the loss of Space Shuttle Columbia.

Camarda continues to work for NASA and has pioneered an engineering pedagogical approach called EPIC Education – that explores how to develop a mission as a collaborative training project.