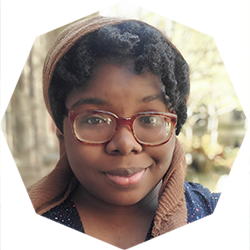 Joalda Morancy is a third-year undergraduate student at the University of Chicago studying Geophysics and Astrophysics, focusing mainly on planetary science. Currently, she serves as Director of Operations for Students for the Exploration and Development of Space USA (SEDS-USA) and is an Earth Science intern at the NASA Jet Propulsion Laboratory, supporting the ECOSTRESS mission that is currently onboard the International Space Station.
Joalda is a huge fan of space exploration and hopes to one day become an astronaut herself. For now, though, she is sticking to studying the different planets in our solar system, specifically Mars. She grew a fascination with the planet during the beginning of her space science journey and was interested in the fact that she someday may walk on the planet herself, and now wants to dedicate her time to learning as much about the planet as she can.
Along with her planetary science interests, Joalda is very passionate about science communication and inspiring the public to learn more about the universe around us. She especially wants to inspire young Black kids to get active in STEM and believe that they belong in the field. Through the NASA JPL Solar System Ambassadors program, she talks to kids on the south side of Chicago and does lots of STEM outreach.
In the future, Joalda hopes to pursue her doctorate in Planetary Science, focusing on the geomorphology of Mars, become an astronaut, and perform science communication to a greater audience!