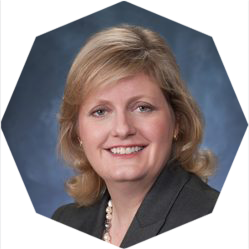 Dr. Julie A. Robinson is the Chief Scientist for the International Space Station (ISS) for the National Aeronautics and Space Administration (NASA) at Johnson Space Center.  She represents all ISS research disciplines at the highest level in the program and provides information and recommendations to senior leaders inside the agency and stakeholders outside the agency.  She chairs the ISS Program Science Forum, made up of the senior scientists from each of the primary space agencies comprising the space station international partnership. As ISS Chief Scientist, Robinson has overseen the transition of the laboratory from the assembly period, with just a few dozen active investigations, to full utilization, with hundreds of active investigations.  Dr. Robinson has an interdisciplinary background in the physical and biological sciences.  Her professional experience has included research activities in a variety of fields, including virology, analytical chemistry, genetics, statistics, field biology, and remote sensing.  She authored numerous scientific publications before moving to science management.  She earned a Bachelor of Science in Chemistry and a Bachelor of Science in Biology from Utah State University in 1989.  She earned a Doctor of Philosophy in Ecology, Evolution and Conservation Biology from the University of Nevada Reno in 1996.  She began her career at NASA Johnson Space Center (working for Lockheed Martin), in the Image Science Laboratory and later led a major NASA-sponsored scientific project to facilitate a distribution network for global maps of coral reefs in the developing world.  She has collaborated with ecologists and conservation biologists in incorporating remote sensing data into their projects, and most recently published the textbook Remote Sensing for Ecology and Conservation Biology (Oxford University Press).  She joined NASA as a civil servant in the Office of the ISS Program Scientist in 2004, was named Deputy ISS Program Scientist in 2006, and ISS Chief Scientist in 2007.  She received the NASA Outstanding Leadership Medal in 2011.