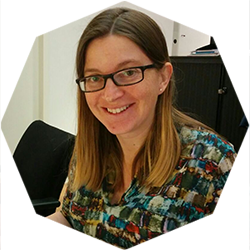 Kelly Geelen is currently the Systems Engineering Team Leader for the Earth Return Orbiter, the spacecraft that will return Mars samples back from Earth as part of the Mars return Campaign, collaboration between ESA and NASA.

After seeing the Mars Pathfinder mission as a teenager, she pursued a career in Mars exploration. She studied aerospace engineering at Delft University in the Netherlands and started her career as a systems engineer for future missions for Airbus  in Stevenage, UK. After five years she moved to ESA/ESTEC to work as a systems engineer newly started Mars Robotic Exploration Programme at ESA, working on Mars Sample Return architecture and potential pre cursor missions.

From this she moved onto the BepiColombo project as a principle systems engineer. After the launch and commissioning of BepiColombo, a mission to explore Mercury, in 2018, she moved back towards working on exploring the red planet.