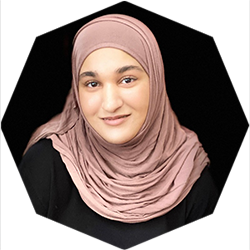 Zainab, also the Co-founder of G.I.V.E.(Global Initiative and Vision for Education), has been an outspoken youth activist leading the charge to encourage girls to pursue STEM fields while advocating for education access for all. Organized by the United Nations Office for Outer Space Affairs (UNOOSA), the forum included hundreds of participants representing over 66 countries. Leaders in space exploration, policy makers, university researchers and various business executives attended the highly anticipated event. NASA’s Deputy Chief Scientist, David Draper, was among the guests who noted how touched he was by Zainab’s presentation. Zainab passionately spoke about the important connection between education and space exploration and why it’s essential to achieving most SDGs and addressing earth’s major challenges, such as climate change. “To get more young people inspired and involved in STEM fields, and to ensure there is diversity in this field, the education system must be revolutionized.” said Zainab. “We also have to realize that there is power in organization, in experts coming together and formulating ideas and solutions.” Zainab highlighted the benefits of having equal access to education and concluded by strongly encouraging the crowd to invest in the next generation.

Zainab continues to be a sought after speaker and was also recently welcomed by Ms Simonetta Di Pippo, Director of UNOOSA, at the 27th Workshop on Space Technology for Socio-Economic Benefits in Washington, DC on October 18-20th. She was also a protagonist at the 83rd edition of Campionaria Generale Internazionale in Bari, Italy on September 14th where she got shout-out from the Prime Minister of Italy Hon. Giuseppe Conte for being such a “Great Ambassador”; and, she was invited by the Technological Aerospace Cluster (DTA) to speak at two international events in Puglia on May 29-30th.

Formerly, Zainab also addressed the inaugural Space Girls Space Women Exhibition in Paris, France. She continues to work alongside the organization as they plan for future events for the exhibition to premier in US and Canada in the coming year.

Zainab is the youngest future astronaut in the world to fly with Virgin Galactic. Her love for space started when she was just 6 years old as she began learning about the solar system. In addition, Zainab’s parents and teachers further nurtured her passion. Zainab says she was also inspired by female astronauts and their ground-breaking achievements, such as: Roberta Bondar, Sally Ride and Anousheh Ansari.

Zainab’s accomplishments have been featured in the media nationally and internationally, including: Time Magazine, Bloomberg, CBC, CTV, CHCH and CityNews. She continues to be a highly sought-after inspirational speaker with various engagements scheduled across Americas, Asia and Europe.